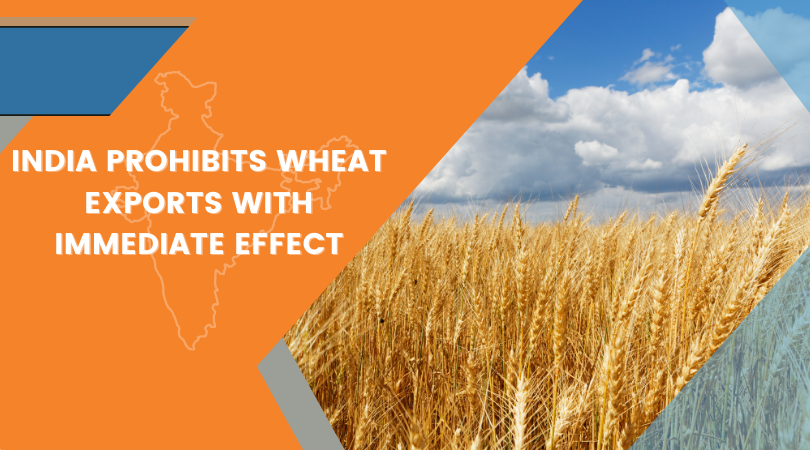 A notification issued by the Indian Government on the 13th of May announced that wheat exports were temporarily banned with immediate effect. The country that makes the second most wheat in the world is trying to keep prices stable right now.

The Directorate General of Foreign Trade (DGFT) stated that wheat would be exported if the Indian government allows it to meet other countries' food security needs and if they request their governments to authorise such shipments. Wheat export loads for which irrevocable letters of credit (LoC) are already in force will be permitted, according to the DGFT.

The price of wheat has spiked unexpectedly, resulting in risks to the food insecurity of India and other vulnerable countries that will not have access to an adequate supply of grain due to rapid changes in the global wheat market.

Reports suggest India's wheat exports may slow down due to a plunge in the Food Corporation of India's stocks amid forceful purchasing from private parties and a general shortage of wheat.

India's plans to cash in on the global wheat rally would be hampered if exports were halted after the war disrupted exports from the Black Sea breadbasket region. India has become a source of goods for countries that buy them. Egypt, which buys the most goods, recently named India as a source for wheat.

Siraj Chaudhry, managing director and chief executive officer of National Commodities Management Services Ltd., said that, despite the complexity surrounding crop size, grain procurement, the war, high fertiliser costs, and poor weather in other developing nations, India's decision to limit wheat exports is a reasonable approach to maintain domestic availability and manage inflation. He also added that a minimal value of exports and numerical constraints would indeed be preferred, as a sudden restriction distorts trading, jeopardises the dependability of Indian exporters, and diminishes farmers' earning potential.

On the other hand, the authorities were overwhelmed with questions about the unexpected embargo on wheat exports, which occurred two days after the centre started to dispatch trade delegations for Morocco, Tunisia, Indonesia, Turkey, and other countries.

DGFT announced the relaxation of trade restrictions for onion seeds. "With significant consequences, the export policy of onion seeds has been set in the banned list," it stated.

Previously, the export of onion seeds was also prohibited.

Consumers, who were already trying to cope with losses during the pandemics, find it difficult to meet household expenses as food and fuel prices continue to rise.